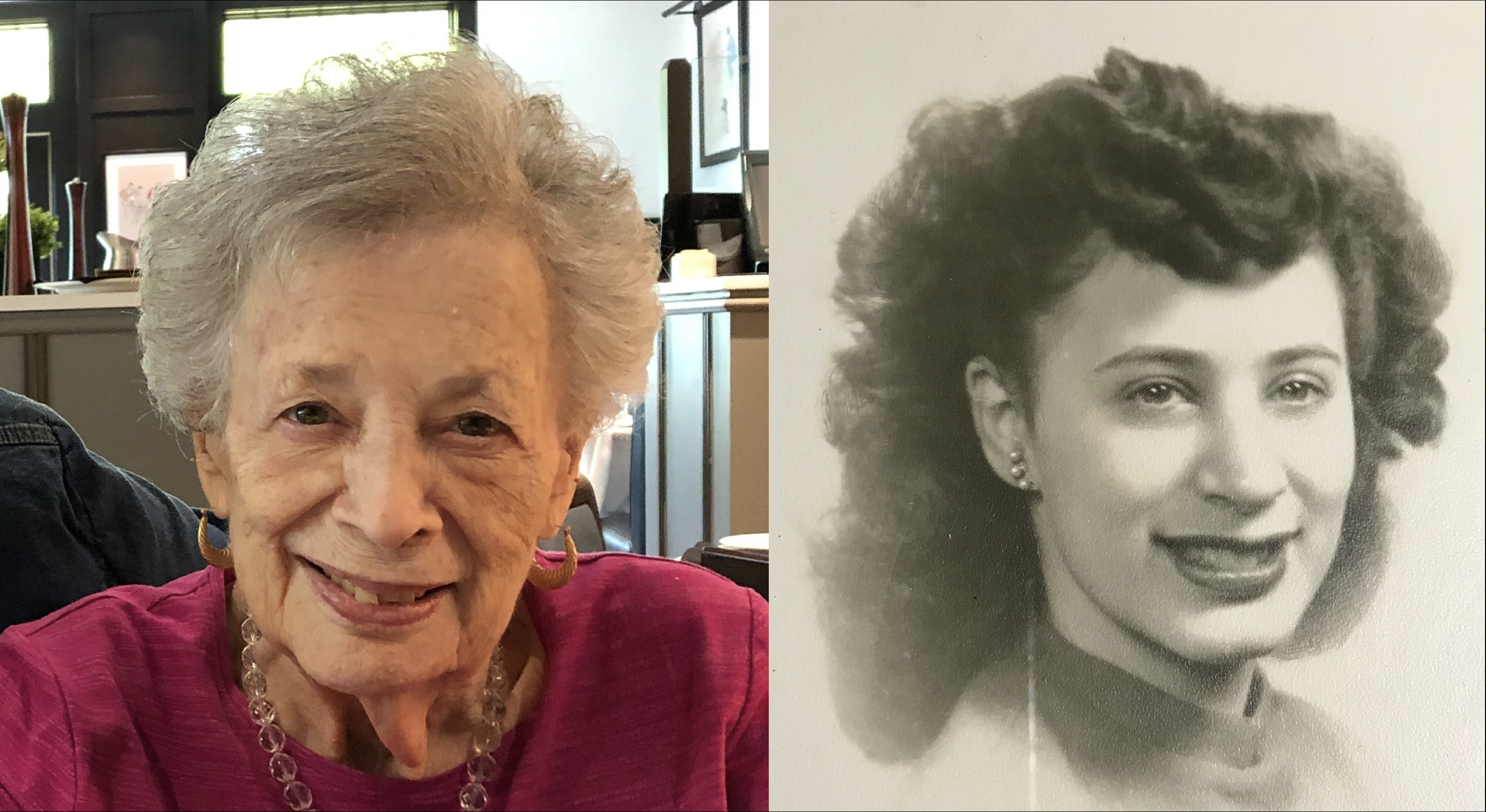 We celebrate the long life of Rhoda Cohen, rich with family and friends.  She was born in the spring before the Great Depression, the younger daughter of Alfred Blaustein and Fannie Baker, following her sister Florence (Finkel) by four years.  Her parents, both lacking middle names, supplied her with two.  Rhoda grew up among the three-deckers of Fernboro Street in Roxbury, in a household of assertive personalities and with a legion of nearby aunts, uncles, and cousins that would provide a continuing frame for her life, as she successively embraced the children and spouses of the next generations.

Rhoda was the pretty girl with the lively personality.  She came into her teens against the backdrop of the war, and graduated from Jeremiah E. Burke High School in 1947.  About that time she met Brockton-born Jerome Sydney Cohen, two years older, shortly after his discharge from the U.S. Navy.  As the often-told family story goes, he discovered her playing softball on a Nantasket beach wearing his Navy fatigues loaned to her by his friends.  They married in May 1949, embarking on an adventure together that would last over 70 years.  After a few years in Brighton, they settled in Sharon in 1954 into a home on a winding suburban street that would be theirs for the next half-century.  On Deerfield Road they joined a neighborhood of young couples in new ranch houses filled with then-budding baby boomers – with their own son Jeffrey arriving in 1952, and daughter Shelley in 1957.  They would relocate to Knollsbrook in Stoughton in 2004.

Rhoda and Jerry had fun together and were fun to be around.  They were gregarious, made good friends, and freely opened their home to others who needed a place to stay.  Rhoda was no shrinking violet; she stood up for herself and loved ones, and if you needed someone to demand that a defective blender be replaced, she would make the call for you.  Rhoda and Jerry sang together at senior centers and to each other. They were regular, if unofficial, contestants at Jeopardy on TV, and they traveled, including trips to Mexico and Hawaii, frequent New Year’s forays to Philadelphia, and family events wherever they might be.

Rhoda’s kitchen table was an outpost of hospitality; no one could get past it without sitting down to eat. She hosted the holiday dinners, always welcoming guests.  Rhoda was known for many dishes but especially her kugel, chocolate bread pudding, “no-name dessert,” and “Jewish spaghetti.”  Her grandchildren gained from her a love of pasta and cottage cheese as comfort food.  Always thinking of her guests, even during her most recent hospital stay Rhoda kept offering to share her tray with visitors.  She was never without a kugel in the freezer ready for a shiva, and might have been upset that she didn’t have one prepared for her own.

Rhoda’s nurturing extended far beyond the kitchen table.  When Jerry went into business for himself, Rhoda built the customer relationships that let it succeed. She connected friends, drawing them into things like the Mah Jong games that continued throughout her life, and which she and her girlfriends approached with a friendly ferocity.  Rhoda dressed meticulously for these games into her 80s and 90s, never leaving the house without earrings and a necklace or scarf.

Things started to change about eight years ago when Jerry was diagnosed with leukemia and then almost miraculously cured, but he lost some mobility and independence.  Rhoda was a fierce advocate for Jerry, managing a nearly full-time program of care from devoted aides and day-health services that allowed Jerry to remain at home.  Jerry passed away in April 2020.  Life without Jerry was hard for Rhoda, but she carried on until a fall and hospitalization this July. The last few months brought a gradual decline, and Rhoda passed away early Saturday morning, 24 October.  The family owes its heartfelt thanks to a team of loving home-health caregivers for all of their support to both Jerry and Rhoda over these past years.

Throughout, Rhoda was a strong and loving presence as wife, mother, aunt, cousin, second mother, and adviser, whether asked or not.  Rhoda will be greatly missed by her children, Jeffrey Cohen and Linda May of Philadelphia, and Shelley and Barnet Goverman of Mansfield.  Rhoda and Jerry loved time with their grandchildren Brett and Cristina Goverman of Norwood, and Ashley Goverman and Isa Braun of New York City.  They were delighted two years ago to greet a great-grandchild, Brett and Cristina’s daughter Ellie.

Rhoda was a devoted aunt and great aunt to Marcia and Leslie Hirsch and their children Matt, Jen, Spike and Nicole; to Donald Finkel; Andrea and Dick Settles; the late Mark Cohen; Candy Cohen-Paul and Ed Paul; David and Melissa Solomon; Martin and Betsy Solomon; Robert Solomon; Richard and the late Susan Solomon; Sharon and Paul Kaliner; and Sue-Ann Solomon.  Rhoda was sister to the late Florence and Harry Finkel, and sister-in-law to Morty and Bobbie Cohen, the late Sandra Cohen, and the late Phyllis and Albert Solomon.  Her cousin Arlene Fox was a younger sister to her, and she was beloved by Arlene’s daughters Andrea and Laurie.

Rhoda will be deeply missed for her warmth, generosity, strength, and sense of fun.

For family and friends who might wish to participate, there will be two Zoom Shiva sessions:

To receive a link to the Zoom sessions, please email Rhodashiva@gmail.com.

Feel free to drop into these at any point.  You may wish to have a candle ready to light together during the concluding Mourner’s Kaddish for each Shiva. (Sorry, Zoom can’t provide food or schnapps digitally yet.)