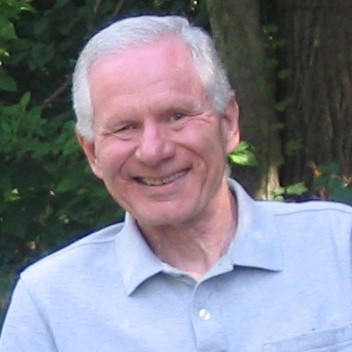 Arnold grew up in Bensonhurst, Brooklyn, where he played basketball in High School, and worked outside of school in various jobs to supplement his parents’ income. One summer, he worked at a game on the famous boardwalk of Coney Island, and met the boss’ daughter, Maxine, who became his loving wife of almost 64 years. Maxine passed away six months before Arnold, after a long bout with Covid and its aftermath.

Arnold and Maxine were inseparable during their marriage, with a bond that served as a role model for their two children, David Edelman, now 59, and Joan (Edelman) Landon, now 57, whom they raised in Brooklyn. Arnold was the first of his family line to go to college, attending Baruch College in Manhattan, studying accounting, while also working part-time. Most of Arnold’s career was spent working for a small NYC accounting firm, H. Kaplan & Co., where his clients included the author Ira Levin, many midtown Manhattan diamond dealers, and factory operations in Northern PA. He held himself to high standards and built strong client relationships. He instilled in his children the importance of having multi-cultural relationships with friends and co-workers, and led by example.

Arnold was an early fan of rock n’ roll in the 1960’s, with a small record collection that would then serve to inspire a rich love of music in his children, whom he encouraged to take music lessons.

Both David’s (wife: Miriam Adams) and Joan’s (husband: David Landon) families eventually settled in the suburbs of Boston. Arnold and Maxine moved up to Walpole when they retired in 2002, to be near them and their five grandchildren: Rachael (Landon) Berger 30, Claire Edelman 29, Jennifer Landon 28, Matthew Edelman 26, and Andrew Edelman 22.

Arnold’s perseverance in the face of many years with Parkinson’s was only one of many reflections of his strength in the face of tough challenges in his life, but he also drew boundless joy and his own inspiration from the growth of his children, and then his grandchildren. He was a kind, loyal, thoughtful husband, father, and grandfather, always available, and always caring.

Arnold will be sadly missed by the wonderfully tight family he and Maxine built, especially as it continues to grow through the generations.

The family asks that donations in his memory go to the Michael J. Fox Foundation for Parkinson’s Research.

The family asks that donations in his memory go to the Michael J. Fox Foundation for Parkinson’s Research