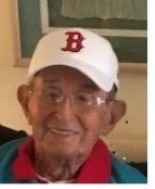 He proudly served in the United States Army from 1942 until 1945 achieving the rank of Staff Sergeant with tours of duty in Brisbane Australia and New Guinea.

Samuel was an instructor in taxes and accounting at Chamberlain Junior College from 1947 until 1949. He became the Comptroller of the Beckerman Shoe Factory in Auburn, ME from 1948 until 1951. It was in 1951 that he became a Certified Public Accountant where he went on to practice at Blonder, Freedman & Gesserman from 1951-1953, becoming a partner in 1954 until 1973. In 1973 he joined Sherman, Bernson, Schneider & Gesserman where he served as a partner until his retirement in 1986.

His interests included golf, tennis, bridge, travel, politics, history, theater, the Patriots and Red Sox. He founded the Gesserman Turkey Bowl annual Thanksgiving morning family & friends tag football game which was first played in 1962 and has been played continually every year since without interruption.

Samuel was the President of B’nai B’rith Financial Professional Lodge, a director of the Young Men’s Hebrew Rehab Center, and was a member of the Men’s Executive Committee of the Boca Delray Golf Club.

Due to the Covid-19 pandemic a private service will be held for Samuel at Sharon Memorial Park. Donations in Samuel’s name can be made to The Make-A-Wish Foundation, Gift Processing, 1702 East Highland Avenue, Suite 400, Phoenix, AZ 85016.